Over the last few months, as Ava has grown older, the playground has become a staple in our daily routine.  It allows her to interact with other toddlers and affords me the opportunity to pretend like I’m not looking at other moms bending over to pick up toys.  Generally, I’m the only dad there, spending my time drumming up small talk with soccer moms and nannies, trying to convince them that I’m an unemployed, devoted father and not some seedy weirdo with a candy van that hangs out at playgrounds during the day. I started Ava on the infant swing and then we graduated up to the Barcalounger swing-chair.  We’ve tried the regular swing seat but she still doesn’t understand that if she lets go, she’ll end up grating her face on the ground like an aged parmesan over penne.  She likes using the ticket booth to sell me fake passes to extremely off-Broadway shows and runs around the pirate ship like a drunken midget sailor. She exercises caution on the hanging bridge (thankfully) and occasionally bloodies her lip while bouncing back and forth on the coil spring animals.  Luckily for me, she understands the danger of walking off the elevated openings and attempting to descend on the chain rope.

Putting all of that aside, every time she yells to go down the slide, I get sweaty palms.  We have a love-hate relationship with the sliding board.  She LOVES it.  I HATE it.  She sees it as a safe and sturdy half-tube of plastic that will embrace and console her all the way down to the bottom with no worries.  I see it as the rickety chute of death, creating an infant-velocity that could make both of us shit our pants.

I figured the best way to get Ava started would be to go tandem, with her sitting in my lap.  What I didn’t realize is that these slides weren’t made for someone my size.  Don’t get me wrong, it’s not like I’m Shaq or anything, I was just a little too big for this.  Instead of having a smooth, fast slide to the bottom, all of our runs felt like we were in car with a sixteen year-old practicing stick-shift.  We were jerky and slow, with my big clown shoes getting hung up on the downward spiral, my elbows and knees taking rug-burn like a promiscuous college chick.

After having enough of the sliding board tattoos, I figured it was time for me to retire and let her attempt this on her own.  She needed to spread her wings. Going down this sliding board for the first time by herself was preparation for life.  She’s not always going to have me or her mom holding her hand, helping her endure life’s challenges and hurdles.  Of course I was worried about being the focus of a playground fatality on the evening news, but was confident she could handle it.  It was time to cut the apron strings. 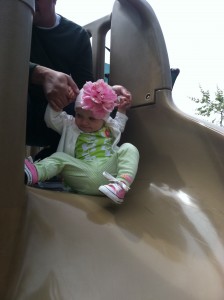 At first Ava seemed excited, but as soon as I got her seated and began to let her go, I could tell excitement turned to fear.  She was laid out, hanging on to me like it was the end.  She was about to endure the sliding board toilet bowl swirl of life.  Without risk, there is no reward.  Sometimes in life, you’re scared to death to do something on your own, but that’s when you need to lace up your pink converse real tight, secure your floral headpiece and dive into the abyss. 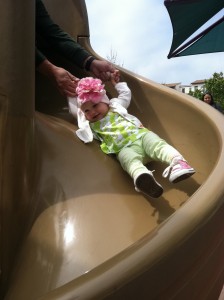 So what if you’re holding on to mortality and after I’ve let you go, you’ve spun around, becoming a disheveled mess at the bottom of the slide with your hat over your face.  You’re in one piece, nothing is broken.  Pick yourself up and dust yourself off.  You took a chance and now you’ve got a great story to tell.  Big deal if your dad took pictures of this and put it on the internet.  He’s taking a chance, just like you.  At the very worst, your outfit gets fucked up and your pregnant mom gets pissed, and divides the bed at night with her Snoogle body pillow. 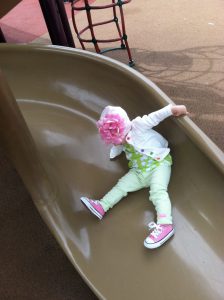 Forget about the flashy ensemble, material things aren’t what’s important.  Trying new things and taking risks are what life is about.  Without them, you’re nothing.  Aside from looking like a Nascar wreck at the bottom of the slide, you’ve learned a big lesson here today.  You’re finally old enough to move out and take on the world.

Just kidding sucka, you’re only 19 months old.  Get back in the car.

I love you Ava.