I’m no tough guy, but I can probably count on one hand, the things that I’m afraid of…

…and I’ve recently added one more:

Ava was sitting nicely, watching TV with us after dinner.  I was winning Jeopardy (yelling answers at Trebek), her eyes were getting heavy and the finish line of the day was in sight.  I did a T-minus countdown in my head as Jen did some baking in the kitchen.  I was beaten down from a marathon day of starting a bunch of side projects I would never complete, along with saying ‘hey, don’t touch that’ or ‘no honey, that’s not for you’.  This kid was going to hit the sack and I was going to slump over in silence and eat cupcakes.  It was all figured out.

I brought Ava into the kitchen so she could say goodnight to Mommy and briefly went to the bathroom.  After I returned, I discovered this. In the 60 seconds it took me to take a leak, Jen had given Ava a chocolate spoon from the cupcakes she was making.  Even though this is an important rite of passage, not tonight.  PLEASE NOT TONIGHT.  My plan was sabotaged.  A quiet evening of eating moist cake in silence was over.

The transformation only took a few minutes.  As Ava cleaned the spoon, I could notice the change.  She was sweating and making noises like a Gremlin.  She was running in place and barking Gibberish. She ran from room to room, tossing our pressed clothing to the ground and ripping our closet savers right off the dowel.  I had brought my legs up onto the sofa and remained in a ‘sitting fetal position’ for several minutes. My kid was going to take down the whole apartment complex.  Jen hopped onto the kitchen counter for safety, as we yelled across the room about our next move. 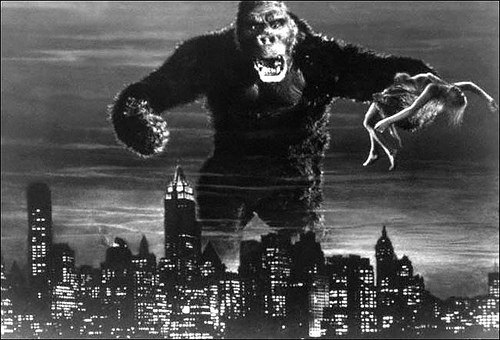 I was ready to put her on a ship back to Skull Island.  She was flailing her prized possession back and forth, slinging chocolate everywhere.  She had it on her shirt and on her face, even under her nails. She was high as a kite. We couldn’t risk her climbing to the top of our building and being taken out by police snipers or aircraft.  My wife and I tackled her, removed the spoon and jumped back.

No more chocolate. What would she do?

She turned on us. She went from kitchen cupboards to closets to toy chests.  Anything that was put away was now out on the floor.  We hit her with tranquilizer darts which had no effect. We filled a sippy cup with diluted chamomile and tossed it at her feet.  Maybe it would reverse the effects of the sugar.

Several hours later, our persistence had paid off.  Like a drunken Irishman*, she came down like a heap in the living room, after the sugar buzz had finally worn off.  We’re lucky she didn’t Farley the coffee table.  We laid her down and started the process of rebuilding.  Our place was in ruin.

We cleaned up and deflated back onto the couch.  MY CUPCAKES. Ohhhh, the delicious cupcakes.  I hustled to the kitchen only to see the clock on the microwave.  11:15pm. The neurotic ‘me’ started to consider that I was too old to eat chocolate after 11pm.  Unless I wanted to be up til 3am watching infomercials, I was shit out of luck.

The chocolate spoon screwed me.

*I’m part Irish guys, so I can say that!