In August, we took Ava on a flight to Atlanta to see her newborn cousin.  Jen’s sister just delivered and we wanted to be there to celebrate with the rest of the family.  She had already flown with Ava a dozen times on her own, but this was my maiden voyage.  For Jen, she’s always been very content and at home.  To keep things interesting, she picked my virgin flight to have her first lapse of tranquil behavior.  Sitting still was not in the cards this time.

With the increasing size of our entourage, the amount of shit we drag from city to city is unfathomable.  As a special treat, I arranged for a cab that smelled like rampant body odor to pick us up for the airport.  With our heads howling out the window for fresh air, the driver finally pulled up to the skycap.  I unloaded everything in front of the counter on the sidewalk and gave our cabbie an extra tip for not touching our bags.  The attendant at the skycap station informed me that since we had an ‘infant in arms’, we didn’t have the luxury of checking in curbside with the rest of high society.

I had four suitcases, two personal items and two carry-ons to get inside, along with Jen, who had Ava and the stroller.  It took me about two seconds to realize that I could never carry all of these at once, but because I’m a dude, I was genetically inclined to impress everyone and try anyway.  I had met my match.  My pride was rattled as I pushed singled dollar bills into the Smart Carte vending machine.  The airlines don’t give a rats ass about you having to dry-hump your luggage through the terminal like some pack mule, even if you do have a baby with you. 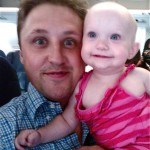 As we weighed and checked our bags, I knew the big game was on.  The big game is when my wife realizes that she refused my earlier request to weigh her giant, over-sized gorilla suitcase.  Instead of getting it dialed in at home, now we needed to open up all of our suitcases in the middle of the airport floor and move underwear and blow-dryers around, shifting weight, trying to come in under 50 pounds.  It’s these times when I usually fix my eyes to the floor, look straight ahead and pray that the firing squad waiting behind us doesn’t shoot.

I was forced to abandon the Smart Carte after check-in and my load was lightened to our four carry-on and personal item duffles.  The only way to manage these was to hang one in the front, back, left and right of me.  I felt like the chair-o-planes ride at the carnival walking up to security.  If you want a workout, break down a family’s luggage to go into the x-ray machine.  Laptops, jewelry, stroller and liquids, then take your shoes off while the people breathing down your neck are making coughing noises to get you to speed it up.  It’s all worth it though, after you shuffle through the metal detector in your socks holding your pants up, watching your long line of shit stuffed in a dozen trays back-up the x-ray machine. If you’re on time, the airlines will generally allow families to pre-board the flight.  This would’ve allowed me to the traveling circus through the plane without smashing everyone in the face with my litany of duffle bags.  I needed to get in there while the plane was empty and take advantage of the vacant overhead bins.  Of course, with the amount of time it took us to get through security, by the time we made it to the jetway, we had missed our window.

The plane was almost full and I struggled my way through 28 rows, lobbing out ‘sorries’ and ‘my bads’ the entire way.  Most of the overhead bins were already closed, a sure sign that we were officially screwed.  I walked up and down the middle aisle with everyone already seated, opening various bins, trying to punch and jam our shit in.  I finally pieced it together and joined my family. 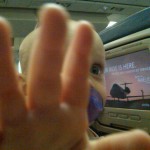 In most cases, Ava will sleep on top of a pillow in Jen’s arms for the entire flight.  This time around, she had issues with the cabin pressurizing as we took off.  I tried frantically to get her to chew or yawn to release the pressure.  She shrieked uncontrollably for those first thirty seconds of take-off and triggered an avalanche of baby tantrums within the plane.  There aren’t many things worse that I could wish upon you than having a toddler spaz out in your lap mid-flight.  Everyone around you fakes like their ear buds are drowning it out and they’re having a relaxing time, but we know the truth.  If 9/11 didn’t eliminate box-cutters from airplanes, you’d be twisting one into my neck by now.

Jen and I traded Ava back and forth throughout the flight, giving an equal beating to the people in front of us.  I struggled to keep her from kicking the back of the seats and standing up, accidentally pinching the hair of the lady in front of us.  Luckily she understood, having kids of her own, and actually enjoyed the cookies Ava dropped over her shoulder throughout the flight.  The only small break in the action was (Jen) taking Ava to the bathroom to change a blowout.  I have to hand it to my wife, I can barely stay on my feet long enough to piss all over the bathroom, let alone navigate a changing table with turbulence.  She’s a warrior.

After an unforgiving 4 hours, we landed safely in Atlanta, where we took over a family bathroom at the airport to ‘freshen up’ for our in-laws.  I don’t know why anyone even bothers ‘freshening up’ in Atlanta in August.  As I hauled our luggage out to the curb, the double-doors opened and I fought for air as the humidity put a stranglehold on my esophagus.  We loaded up my father-in-law’s car and drove away towards the hospital.