I’ve been a die-hard Philadelphia Phillies fan since I was 8 years old. Framed 1980 World Series Pennants in my room, autographed Jamie Moyer ball on my nightstand, a dozen jerseys hanging in the closet.  In times of extreme boredom, I’ll break out the powder blue Mike Schmidt for no reason, walk to the grocery store and fumble around produce just to see if anyone will throw me a random high-five. This is me on TV in June of ’09, sitting behind home plate during a night game in LA. 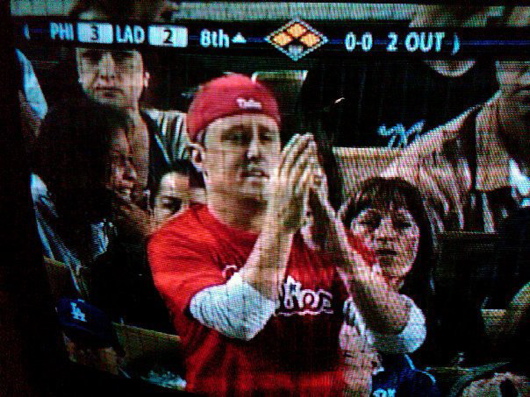 Jen was only 5 months pregnant, but I felt a little nervous about going that night.  Ultimately, it was less about her going into labor prematurely and more about the beatdown I was going to get trotting into Dodger Stadium with my candy apple Utley jersey and matching hat.  That lady behind me in the wig says it all.

Months had passed and October had me drunk with power after the Phils took out the Rockies to win the NLDS. Three days later, we moved on to the NLCS against the LA Dodgers.  Game 5 was here and I had been dominating the living room TV with my wife being relegated to the bedroom to watch ‘Real Housewives’.  If the Phillies win, they go to the World Series for the second year in a row.  HUGE.  What I didn’t realize, is that I had double-dvr’d the game in the bedroom, which effectively canceled out her programming, which in retrospect, must’ve been the final straw. That’s when I heard it.

“Forget about the game, we’ve got shit to do.” It was like a bag of gas-soaked charcoal briquettes had just lit up the inside of my head.  I was short of breath and smelled toast.  I knew that we had some preparations to make before our baby girl got here and only now did I realize that I had put them off until the 11th hour.

A few weeks earlier, I took all of my collectibles and sports memorabilia down from the walls in the home office (weak sauce) because this is where she would be living.  So here I am, listening to the game from the other room, running ‘precious pink’ paint up and down the wall with a roller, trying to avoid streaks.  Much like Costanza, my worlds were now colliding.

I went from one thing to the next. “Once the walls are done, the crib needs to be assembled.” she said. “When you’re finished with the crib, let’s change that overhead light cover, it doesn’t look girly enough.” “While you’re doing that, I’ll open up all of this pink bedding and matching curtains.” “Wait, you didn’t put the new curtain rod up yet?” “Can you give me a hand hanging up all of these butterfly mirrors before you put together the Diaper Genie?”, she asked.  All I could do is fumble around inside of my toolbox looking for lost sockets, try to avoid eye contact, along with being taken out by her stomach as she swung it around the room, checking things off of the to-do list.

I thought the worst might be over until I caught her standing in the room looking around, deep in thought, like she was doing long division. Instinct had told me that this wasn’t a good situation. “Do the pink walls match all of the pink bedding and curtains?”, she asked.  I was flattened. I knew that there was no fucking way I was painting this room again and certainly wasn’t going to the department store on a weekend returns mission.  I did my best and performed a few slight-of-hand moves with some random pink swatches she had lying around, telling her that it was all fantastic and somehow it worked. Sure, she gave me a few super suspecting looks, like I was lying, but it comes with the territory.  What matters is that we were done for the day.

The reality (aside from me missing the game) was that the Phillies were going to the World Series again.

And I was going to be a Dad.