Back in the day, we didn’t need to call anyone to come and fix the leaky faucet, creaky wooden stair or A/C outlet that didn’t work. When it came to fixing stuff, my dad was Johnny-on-the-spot. The old man was (and still is) a brick mason by trade. He’d grown up on a million job sites and had a handful of fishing buddies that specialized in various trades – electricians, plumbers, concrete, etc. I often joke that my childhood home was built from the ground up over several weekends and a couple cases of Rolling Rock. He’ll probably kill me for posting this gun show.

I did my best to pay attention and even offer help when he was doing stuff around the house, trying to catalogue little tips and tricks that might come in handy one day. I did the same thing while working on the farm part-time through junior high and high school and begin to feel comfortable with every tool found in the decommissioned school bus that housed them. Learning how to grease bearings, fix small equipment and drive a tractor before I even became a teenager was something to proud of.

After college I moved from the rolling fields of rural Pennsylvania to Beverly Hills, California – land of a million people that had probably never picked up a tool in their lives.

I spent almost a decade and a half there – abandoning any opportunities to work on stuff or continue being ‘handy’.

When we moved back east a few years ago, I made it my goal to resupply my tool archive – something a lot of dads take great pride in. But now that I have all these great tools (circular saw, jigsaw, sander, drills, clamps, quick squares), they sit in the garage. “What are you even going to do with all of those tools?” my wife often asks.

These are the words that stoke the fire in my belly. Does she think that I don’t know how to build anything??

I’d been wanting to build a raised garden bed to house my pickling cucumbers, peppers, okra and tomatoes this summer. 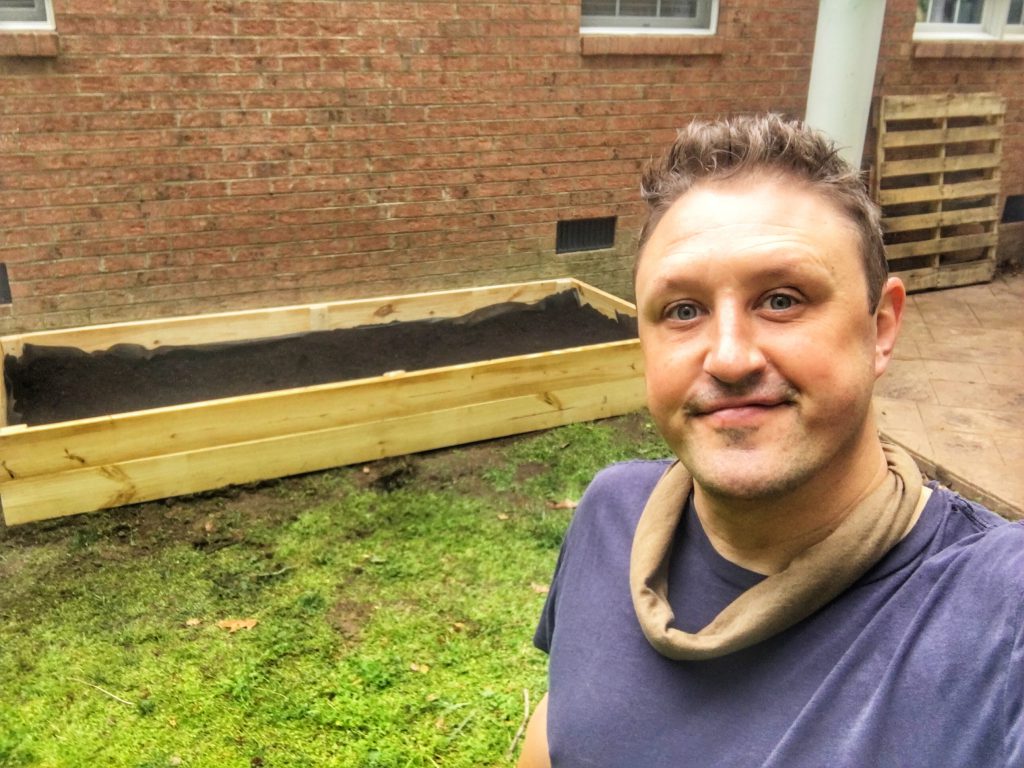 Halfway done adding the soil. I’ll be adding a cucumber trellis that rolls up the brick in between the windows.

So we fired up the truck and took a family trip to Home Depot to pull together everything that we needed. This also allowed me to dust off those compression straps in order to put those 2″ x 8″ x 10’s up on the roof for the ride home!

We pulled everything together on the back patio and finally it was time to set the boys up with proper eye protection. Charlie was my main helper on this one, in between running inside to eat cheese sticks and yogurt tubes – kid has a death wish for constipation. 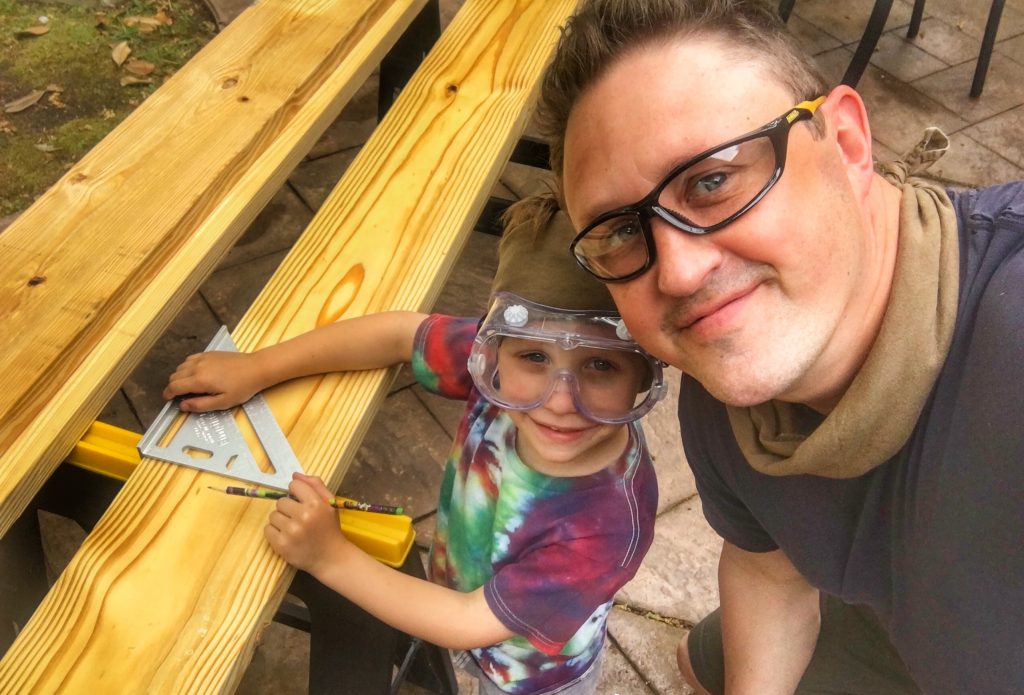 Charlie is old enough to understand his numbers and having him help me do the measurements was a great weekend math lesson – just what he wanted!

The little dude was excited to hear the roar of those power tools that have been collecting dust in the garage! 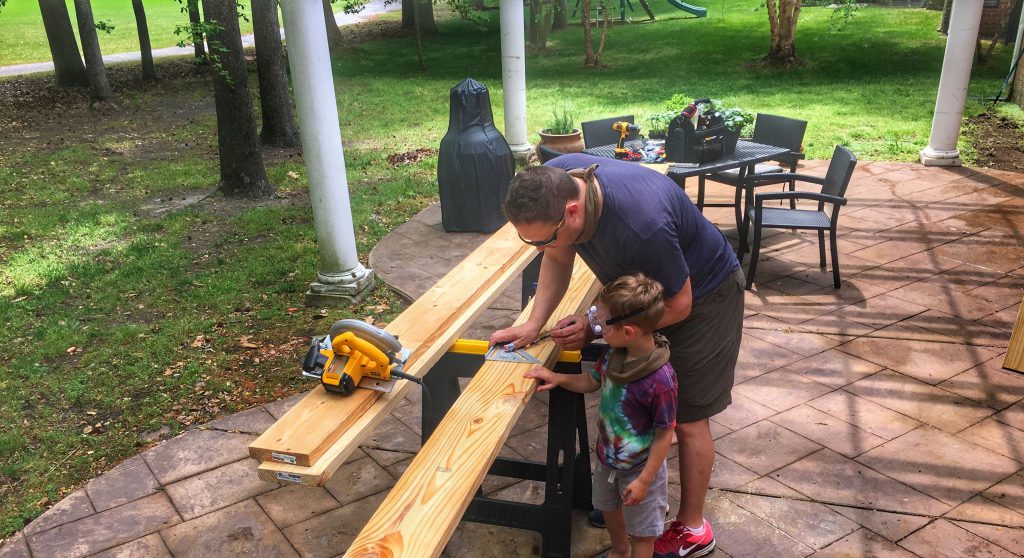 While I don’t encourage open-toed shoes (not pictured) on the construction site, at least the kid has his goggles on.

On one of his many excursions inside to the kitchen prompted by boredom and hunger, I finally got underway – feeling to rip and roar of my circular saw. 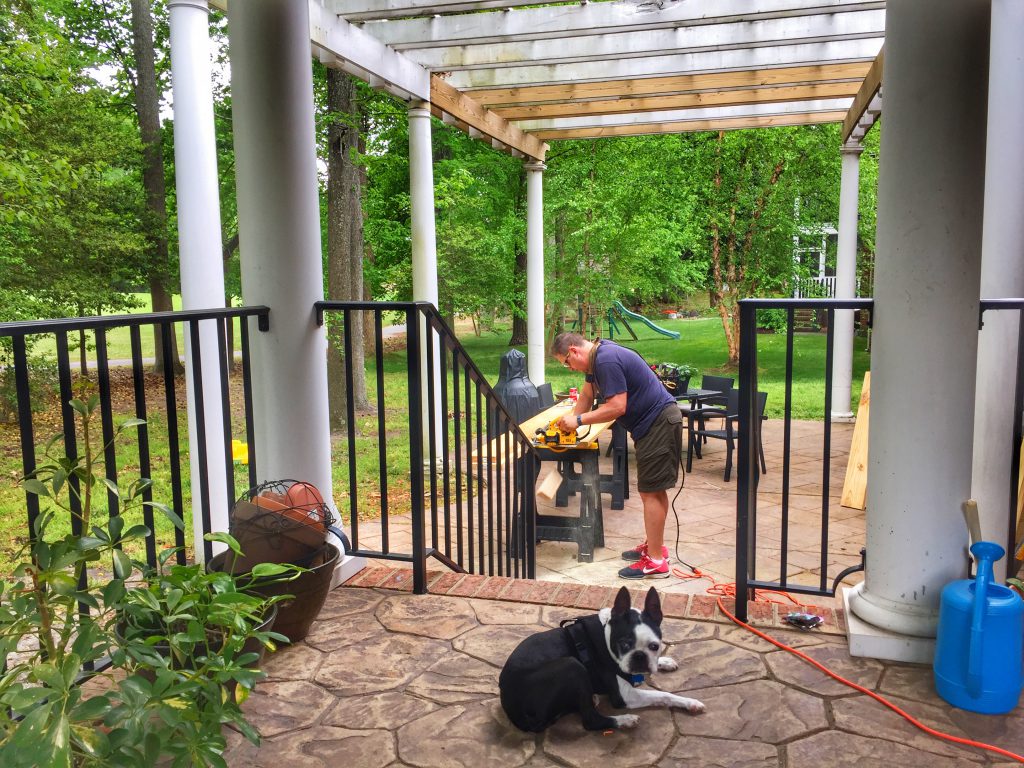 My dog, Cooper, is the only paid attendance for this show.

Once I cut the short sides and stakes, I began to attach the stakes to the long sides. 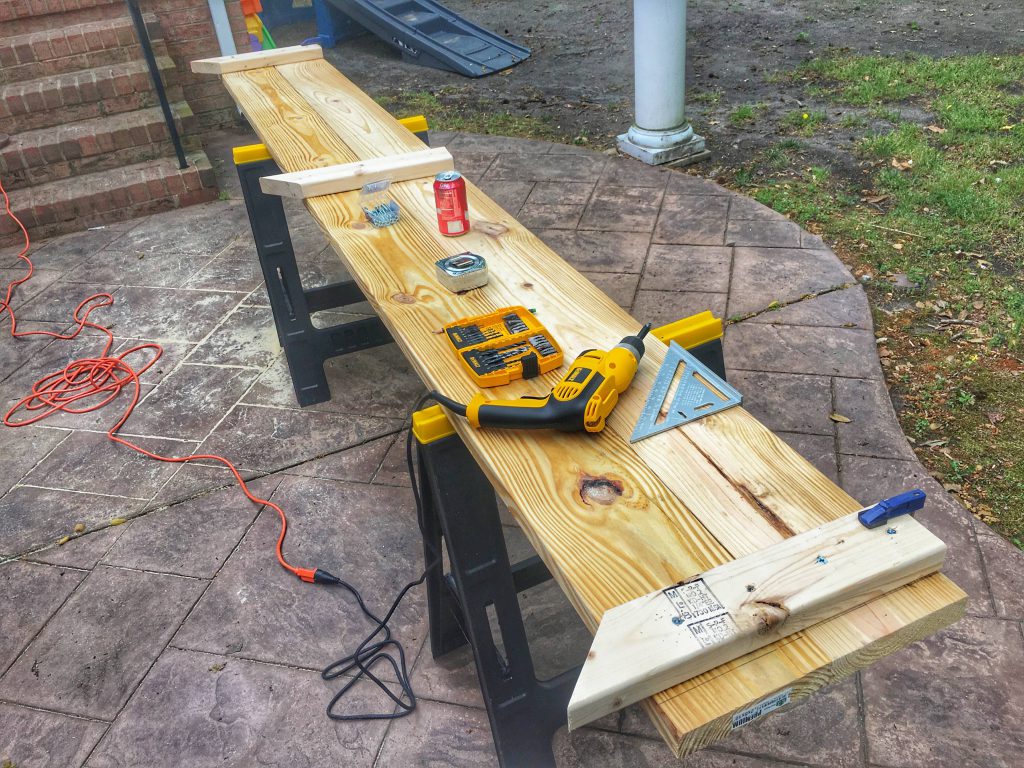 Feeling good and confident about this.

With the stakes attached to the long sides, I lined them up in the ballpark area where the garden would live. 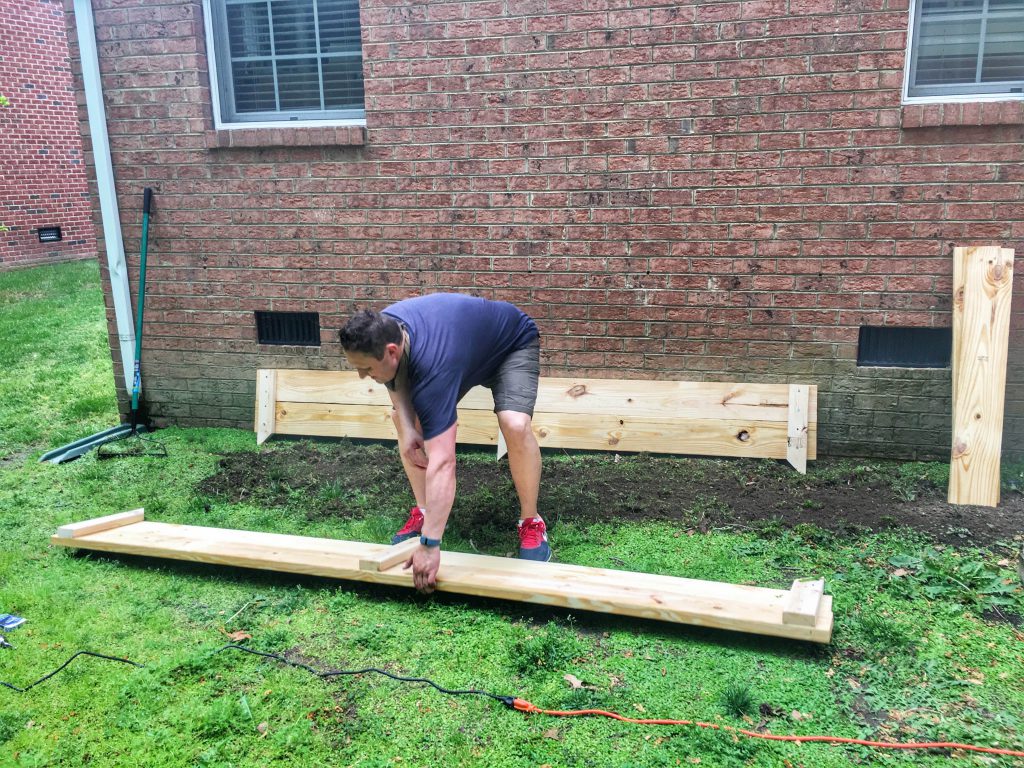 Lift with your legs, not your back, like me.

It took a few minutes to rake out the area where I was going drop the garden in. We had to get it level (so my wife’s OCD didn’t dominate our summer) with one of the mud lines along the brick. Then I began to attach the shorties. 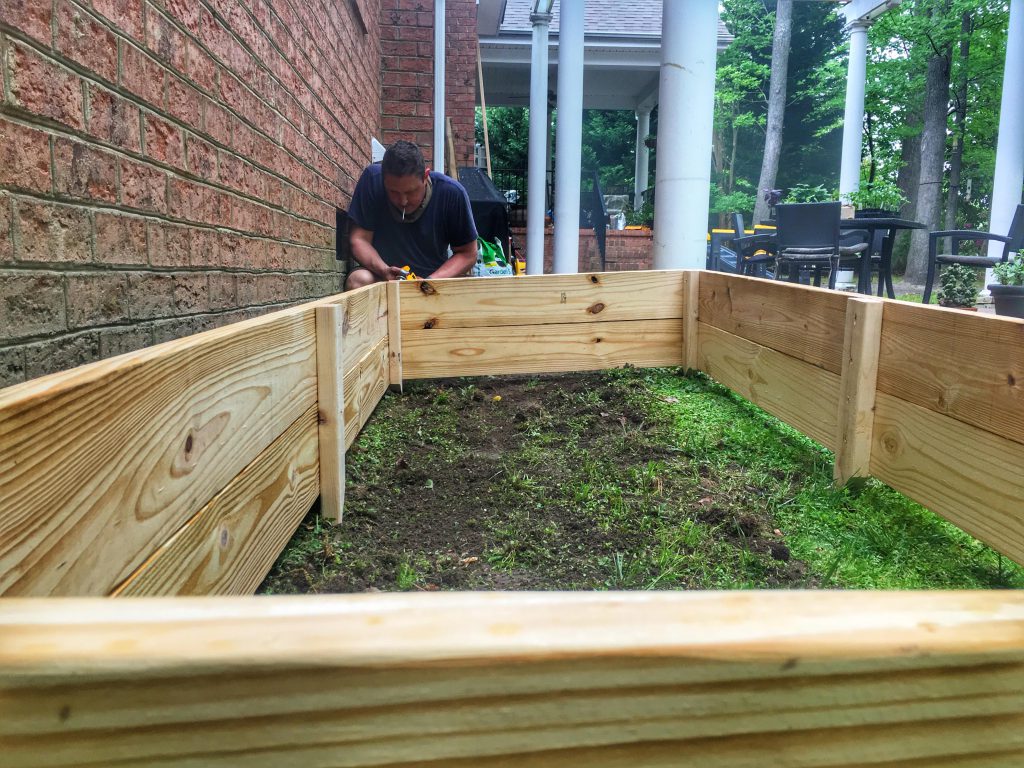 Not a cigarette in my mouth. Real men hold screws in their mouths.

A little more raking and I used a mini-sledge to give it a few whacks into the ground. At this point in the process, Charlie had been inside as it began to rain – most likely going for the yogurt tube record. So I pulled him back out to give me a hand laying down the weed guard, which will live under the soil, hopefully keeping those pests at bay through the season.

Once we had the fabric laid in, I trimmed the edges and began to add soil. Initially, I thought I needed 3 cubic feet of soil but for some reason, I biffed that part – so back to the Home Depot we go. I may even add a coat of white paint to match the pergola that’s about to get repainted, so everything matches. 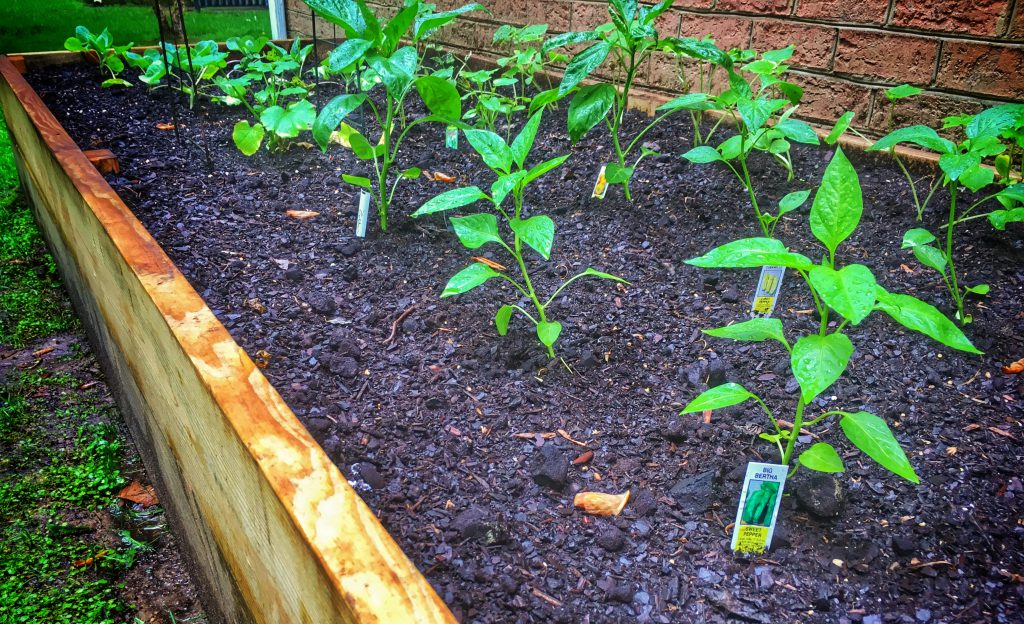 With my confidence brimming, I’m taking it upon myself to construct that self-designed vertical cucumber trellis as an added bonus. As it stands, I’m super stoked about this project and I got a chance to hang out and work with my son, the same way me and my dad did 30 years ago.

This was a WIN-WIN all the way around.

« Turning on the Afterburners for Mother’s Day.
Getting Outside is Half the Battle. »