EDITOR’S NOTE: This is a sponsored post on behalf of Laffy Taffy and their #HaffToLaff ‘Spooktacular Family’ Costume Challenge, but the shame and partial embarrassment are completely mine.

There were so many years before we had kids that I lived up to my name ‘Mr. Procrastinator.’ If you ask my wife it’s still the best adjective by far to describe my personality. I consistently tossed around recycled Halloween costume ideas like wrapping myself in aluminum foil and calling myself ‘leftovers’. Or draping myself in a dozen power strips or extension cords and enter a party as a ‘random hook-up’.

But the reality is that those attempts (while last minute) were ORIGINAL and HEARTFELT. The same idea applies to the Laffy Taffy #HaffToLaff ‘Spooktacular Family’ Costume Challenge that encourages parents and kids to come up with a costume that’s original, funny, awww-inspiring and creative, but I’ll get into that in a minute. First, let’s take a look at the Halloweens that brought me to this point…

You learn from the best – and my parent’s last minute Batman costume paired with winter gloves and hush puppies didn’t exactly win any awards – but look how happy I am. 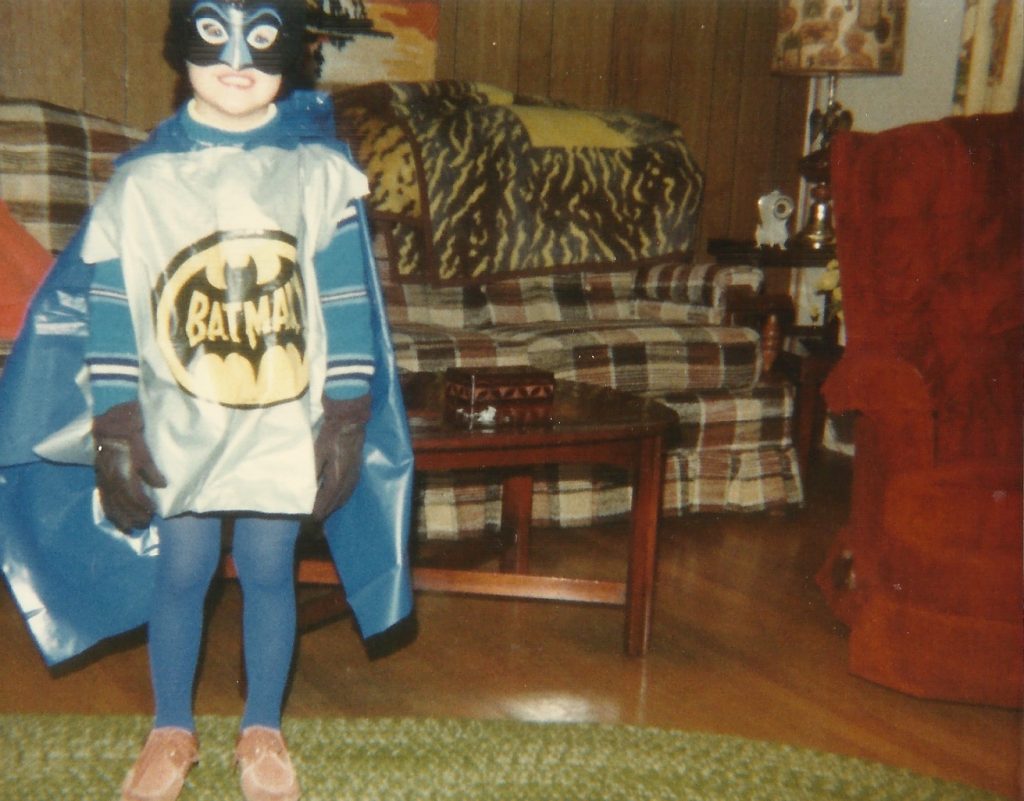 Fast forward thirty (okay, forty) some-odd years and things have changed. I’m no longer that studly eligible bachelor looking for my female electrical outlet. 1 wife + 4 kids in four different states and each move comes with a new social network that is never as full as fall weekends leading up to Halloween.

In the beginning, we started out with some pre-bought costumes… A whoopie cushion and lobster (along with Cooper – RIP – dressed as a turtle) did the trick.

The next year we decided to go with a bear… (editor’s note: that is apparently, a monkey, according to my wife. I argue that bears can eat bananas too). 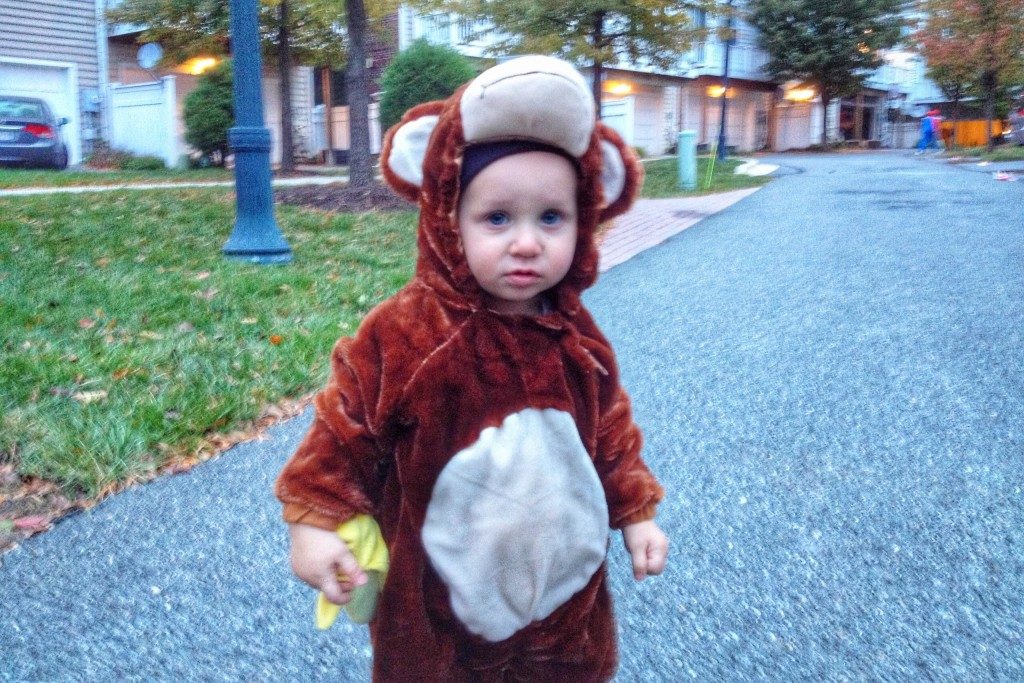 …because how could you ever resist this situation?

But in the era of Pinterest and everyone trying to outdo the next family, I ditched the pre-fabbed costumes and went for one of my favorites. 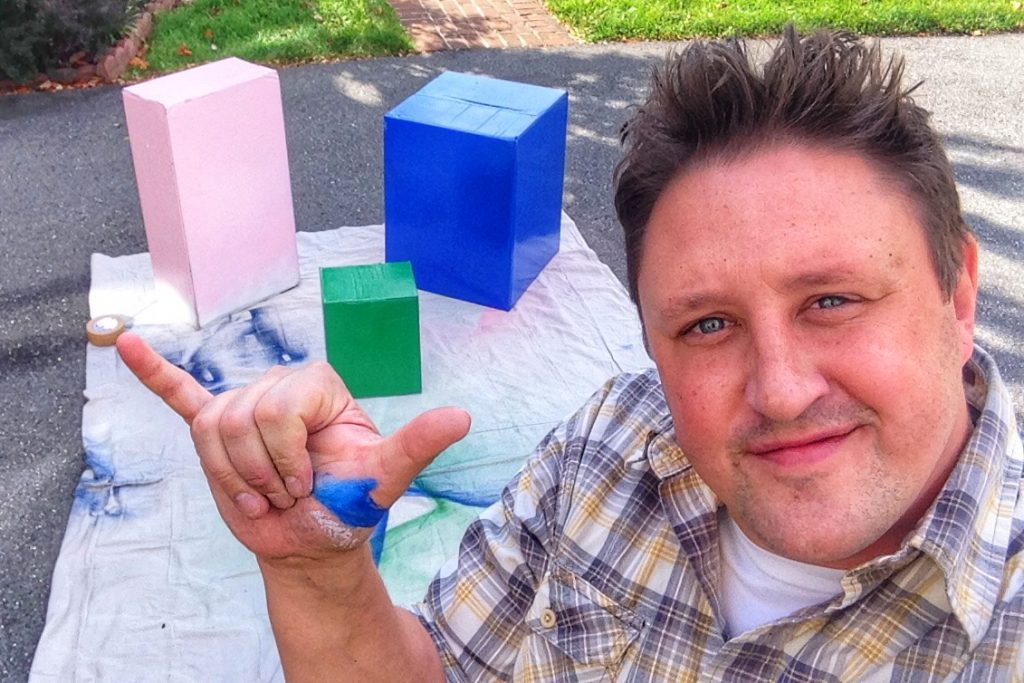 You can take a guess…. 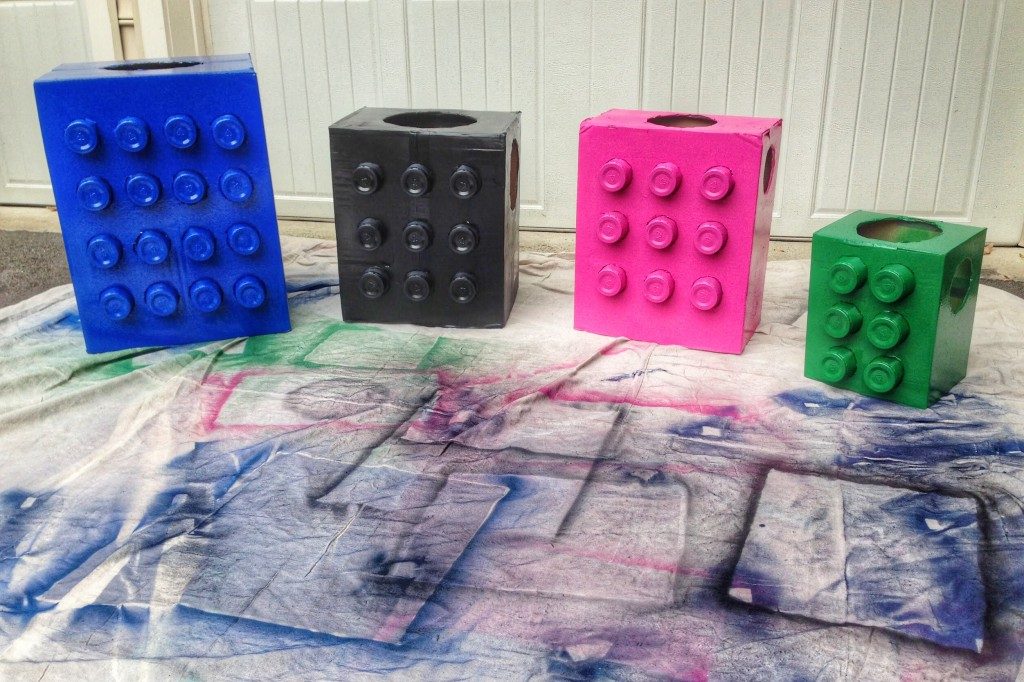 The Lego family was born. Don’t ask how we got in the truck to get to the parade or party, it took two vehicles and some real mental fortitude. 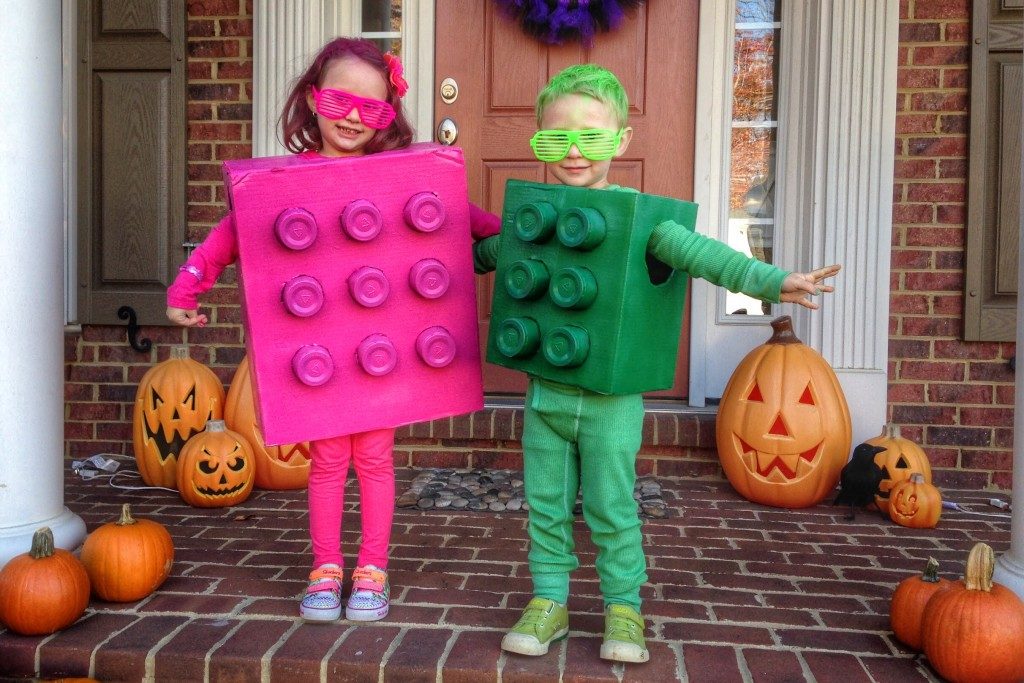 Annndddd…. mom and dad had to participate as well… 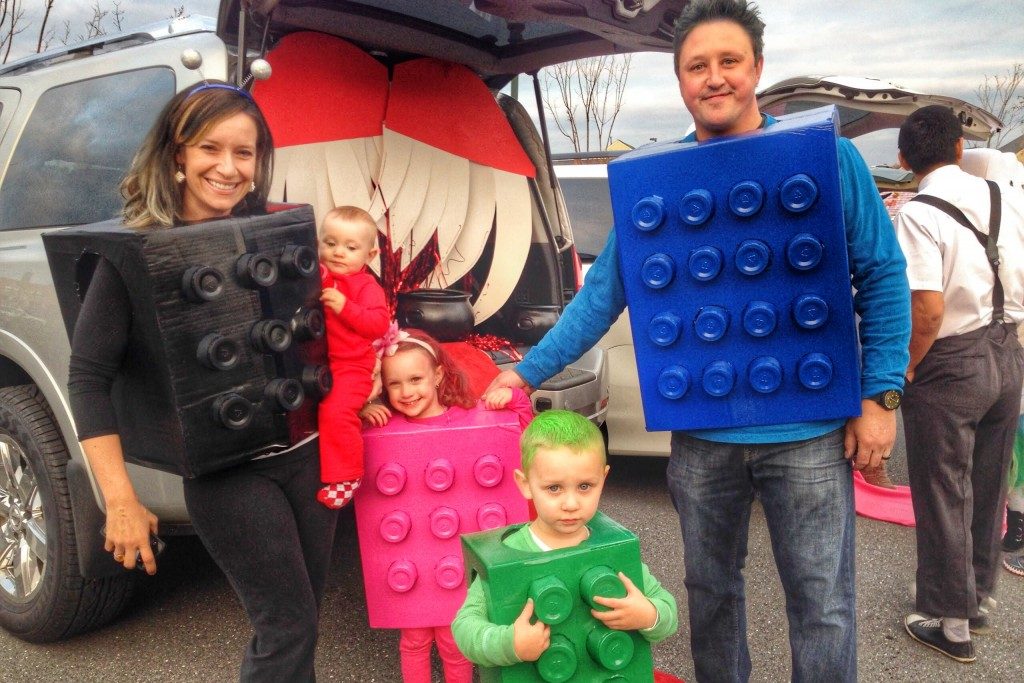 Complete with a handmade set of vampire fangs in the back of the truck during the ‘Trunk or Treat’ to give us the edge.

And then there was the year that we loved sushi… I have to give my wife some credit on this one–all of those, hand cut, hand painted and made with love. 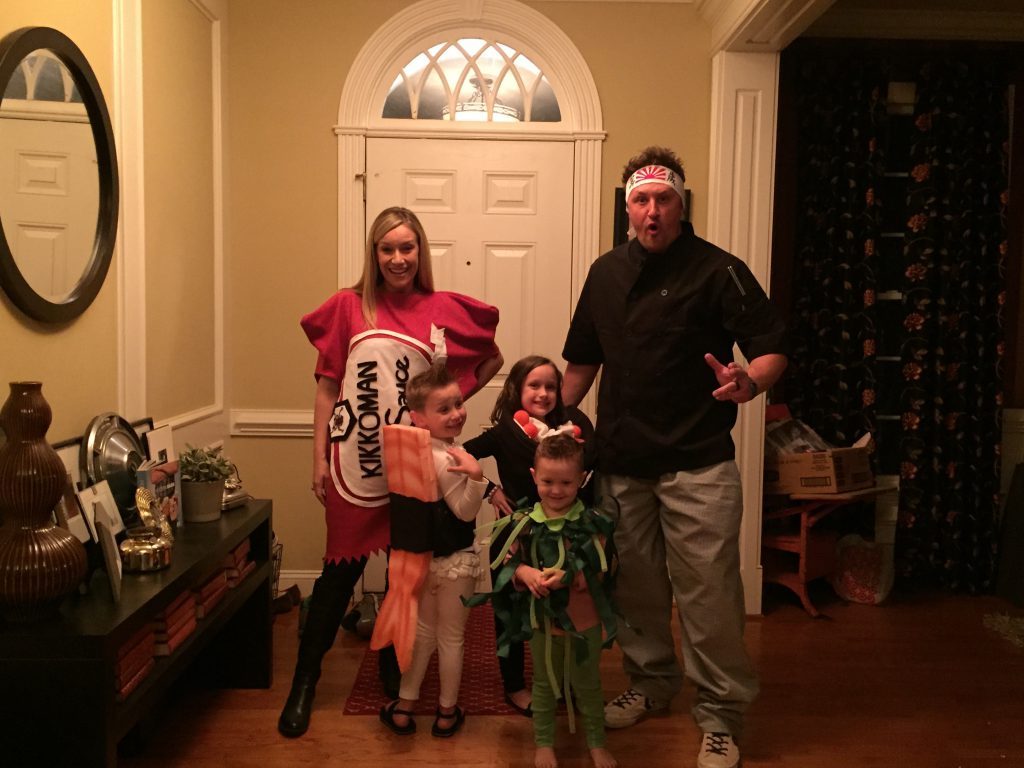 However, no one will likely forget our year as the old school 1970’s ‘Troll Family’, mainly because I’m a grown man in a nude unitard walking around our neighborhood with most of my extended family in tow all dressed in, you guessed it – nude uni’s. Oh, and my mother-in-law had broken her foot that year and was aided by a walker. We were a real deal sideshow. 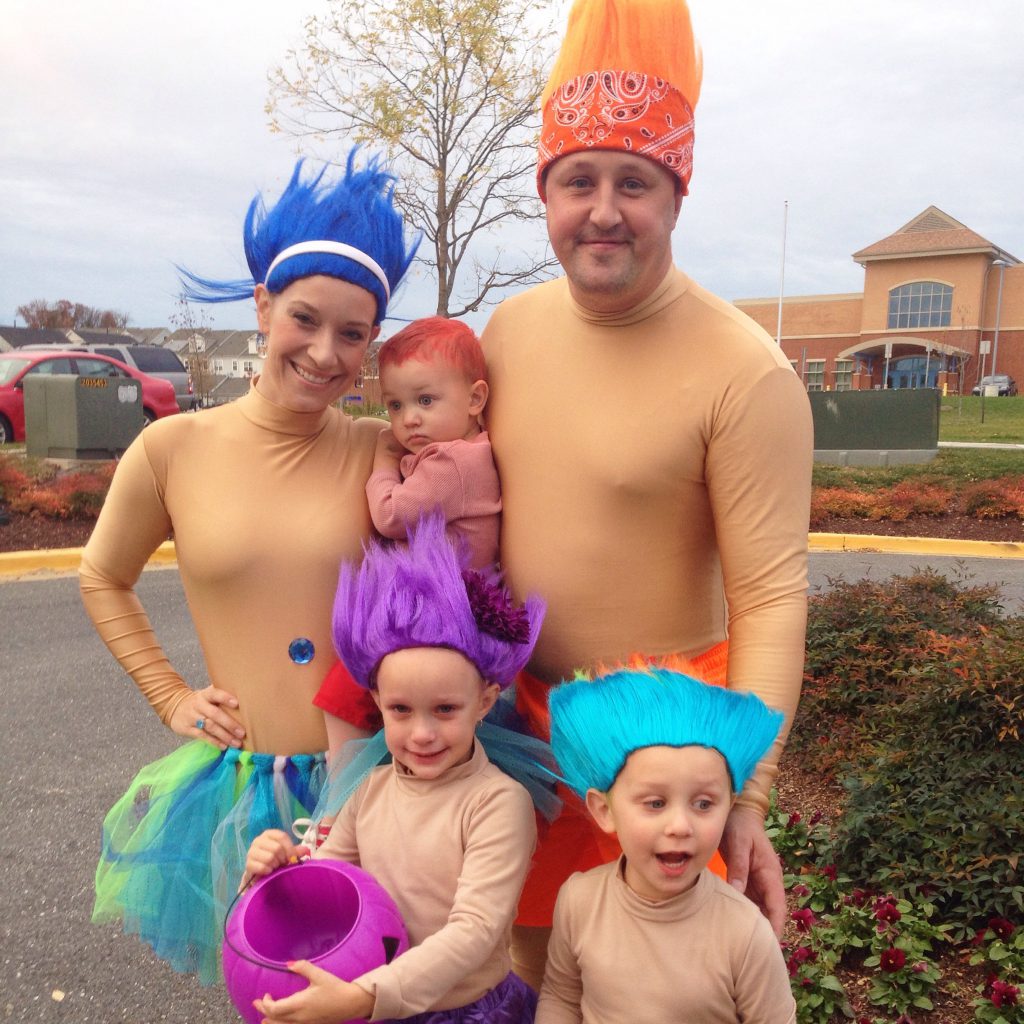 So how do we beat it this year? Is it a Stranger Things kinda year? Stick figures? Smurfs?

Each weekend this month has been spent toying around with some ideas. This past weekend I partnered up with Laffy Taffy to inspire families out there to participate in a ‘Spooktacular Family’ Costume Challenge. I figure with as many parties and festivals and Halloween parades as this month will bring, who can settle on just ONE costume when you can have four? 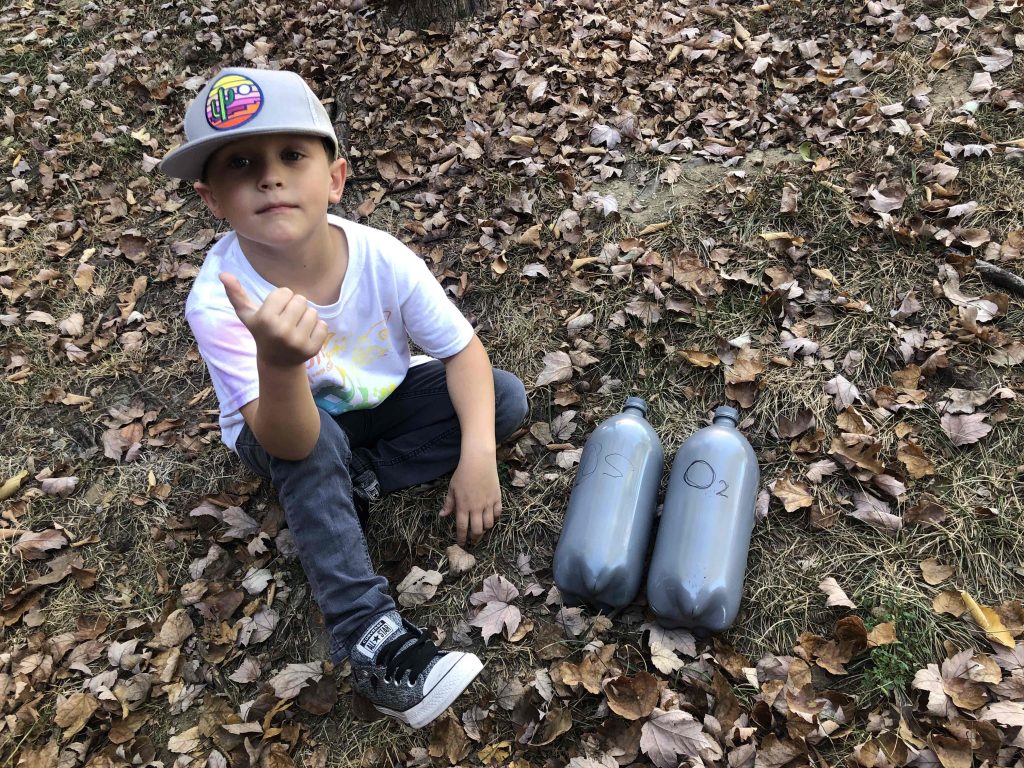 Mason and I got to work on a few empty Ginger Ale 2-liters, spray painted them silver for air tanks. The next move was to hit the garage and pull out our water gear before the season is completely over. Contrary to popular belief, I don’t have a penchant for wearing full-body outfits (especially as I get older), but the wetsuit fit the bill. Voila! We’re scuba divers… sorta. 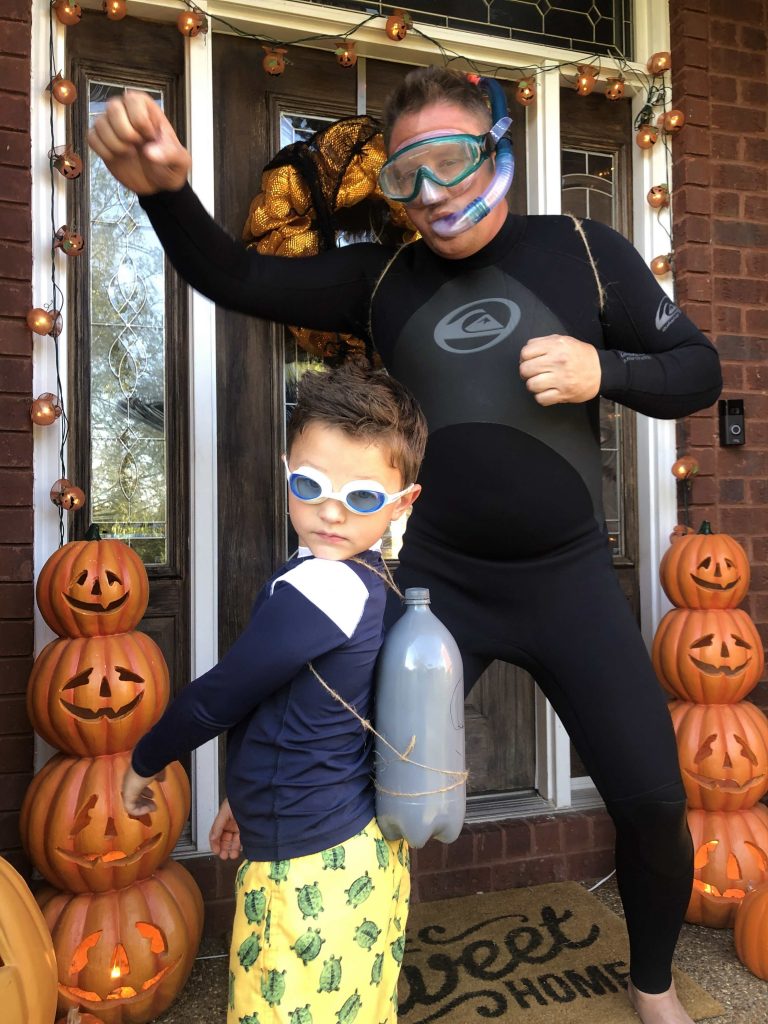 This outfit might not make the final cut, but we’re gonna keep trying. You should check out my Instagram stories @dad_or_alive and Facebook page for the complete journey in me pulling this together – complete with rare footage of me attempting to get in this damn suit. Maybe.

But now it’s time for you to shine!

Simply post your costume creations on socials using the hashtag #HaffToLaff and tag @LaffyTaffy. There’s a chance you might be featured on the Laffy Taffy Instagram page (with your approval, of course).

It’s time to put in some sweat equity and get crafting because they’re looking for costumes that are original, funny, awww-inspiring and creative. You don’t always need to go big budget to get it done!