HEY! I wrote a few books - CHECK THEM OUT!
9shares

I’ve been in my daughter’s life from the beginning.

From the day she was born, took her first breath and cried in my arms. I’ve been there as she began to crawl and take her first steps, say her first word and develop an amazing and endearing personality.

I became a full-time stay-at-home dad to her when she was only a few weeks old and we’ve been best friends ever since. Even though we’ve added two rambunctious little brothers to the mix, and I love all of my kids equally, she will always hold a special place in my heart. First born, but also a beautiful little girl.

I’ve painted her nails, played ‘dollhouse’, learned how to coordinate her outfits and braid her hair. She’s going to be five soon, and while that’s still really young, I’ve watched her begin to achieve a ‘sense of self’, establishing her own identity and often times, pushing me away, telling me that ‘she can do it’ or ‘not to touch her’, as she can buckle herself into the car.

I know these are tiny acts of rebellion and perhaps I’m being too sensitive about it, but I hope she doesn’t feel inclined to always push me away.

I suppose that I’ve taken it for granted, chronicling her entire life on my blog with thousands of pictures and humorous observations. I guess I sometimes wonder at what point she’s going to have her own online identity and politely request (by screaming at me) that I respect her privacy.

And when she’s finally mature (and internet savvy) enough to explore online, what kind of impression have I made or influence have I had on her? I mean, truthfully, I’ve spent the last 4+ years, a majority of the time offering bitter musings about how difficult it can sometimes be as a parent, but I can’t short-change myself, as I’ve also shared the joy. 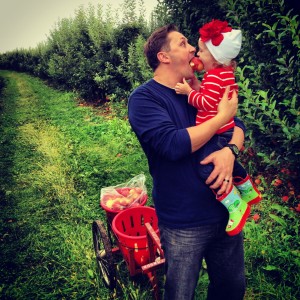 I’m reminded of a summit that I attended a few months ago, as part of my continuing involvement with FAAR (Foundation for Advancing Alcohol Responsibility, formerly The Century Council). There was a speaker, Haley Kilpatrick (@HaleyKilpatrick), who founded a group called ‘Girl Talk’, a non-profit peer-to-peer mentoring program for middle school girls. Haley began this as a high-schooler, talking with middle school aged girls about things they were going through, sharing experiences and advice, allowing them to not feel so ‘alone’.

I got to see Haley speak again, a few weeks ago, as FAAR had sponsored me to attend the annual Mom Summit 2.0 in Atlanta, serving as an ambassador for the initiative. Aside from Haley’s speech there, I also sat in on a panel that focused on girls in this same age group, being bullied by other girls, attacking their self-esteem and just being downright nasty.

It showed examples of girls posting videos online, asking their audience if they thought they were pretty. These girls had been bullied and verbally attacked to the point that they were actually questioning their own beauty, inside and out.

It literally broke my heart. This could be my daughter in a few years, how do I know?

I can’t expect her not to grow up and feel inclined to explore her independence, but the thought of her potentially pushing her dad away (just because he’s ‘DAD’) to the point where I don’t know what she’s going through seems scary to me. I suppose that I never really gave a lot of thought to the fact that girls may question their beauty, etc. As a boy, I feel like we just steamroll over everything that gets in our way, but maybe I’m wrong.

I suppose the best I can do is just keep on showing her love, let her know that she can always come to me, regardless of the subject (unless it’s menstruation or making me buy tampons!)… just kidding.

I can also consider monitoring myself online, evaluating what kind of digital footprint I’m leaving for her to uncover… the example I’m setting. I’m not gonna stop bitching about someone pooping in the corner or drawing markers on my wall, but I’m just saying, I guess I could take a little more consideration with what I post on social media.

As a parent, are you at all concerned about what you post online and how your kids might interpret it?

Have you changed your online practices as your kids get older?