If you noticed a small lapse of correspondence last week, it’s because I was in New Orleans, Louisiana, attending the 3rd annual Dad Summit 2.0.

I had attended last year in Houston, Texas as a fly on the wall, somewhat unfamiliar with the small militia of dad bloggers occupying the space.  At the time, I had a blog that was gaining traction and a book about fatherhood in the works.  I felt like it would behoove me to attend the event and soak in some knowledge from the various speakers.

What happened between then and now has surprised me in a way I didn’t expect.  I made some great connections in Houston, learned a lot about publishing, SEO, how to build an audience and how to nearly overdose on barbeque sauce.  In the last 12 months, I’ve remained in touch with many of the dads I met down in Texas that weekend.  I’ve joined a Facebook group with them to stay connected, share content, exchange and promote ideas, offer moral and emotional support to one another and on occasional make a few dick and fart jokes, which quite honestly, get me through the day.  When I joined, there were maybe just over 100 members.  Today?  Almost 600. 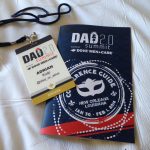 It’s an understatement to say that I was humbled and honored to be included this year, to be asked to moderate and speak on a panel, and to once again be reunited with such a fascinating group of fathers.  I think that my friend and fellow dad blogger, Chris Read from Canadian Dad, said it best in his recap entitled ‘The Measure of a Man‘…

“This conference is a place where egos are checked at the door and real emotion is not only allowed to be shared, but very much encouraged.”

I arrived at Louis Armstrong Airport on Thursday afternoon, took a cab to the J.W. Marriott on the edge of the French Quarter and dropped my bags in the room.  I was starving and immediately headed right around the corner to the ACME Oyster House, an establishment that my brother had recommended after seeing it on Man vs. Food.  I shoveled fresh oysters on the half shell into my face, slurping and letting out orgasmic moans along the way and could care less if anyone found it rude.  Then I tried the chargrilled version, took down some crawfish hush puppies and chased it all down with some seafood gumbo, my dessert. 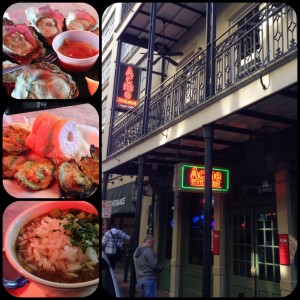 I felt like a beached whale, pushing my belly out, wearing it like a badge of honor.  That is, until I looked up at the leader board and noticed that the a guy named Boyd from Hammonds, Louisiana had come in here recently and eaten 42 1/2 dozen oysters – that’s 510 oysters.  IN ONE SITTING.  I sucked in my man-gut, shrank down in my stool and asked for the check.

I hustled back to the hotel and met up with several familiar faces from the year before.  I had just missed the walking tour through the French Quarter, but that was fine, as I was already signed up for a 7am bike ride through the neighborhood.  We mingled and busted each others balls for a good hour or two and eventually made our way to the welcome party, so graciously hosted by Dove Men+Care.  There was some fantastic brass music emanating through the 2-floor set up, accompanied by an outstanding spread of dinner and desserts.

After being up since 5:30am earlier that day and knowing that I was going to pull a Lance Armstrong around the oldest neighborhood in the city at 7am, I turned in.

The following morning I was up at 6:30am and made my way downstairs to join the other 30 or so bikers.

We left in three groups of 8 people and first headed down towards the Aquarium of the Americas (I made a conscious effort NOT to look at the Harrah’s Casino on my right, no need for anyone to experience a bunch of middle-aged guys in spandex and bike helmets shooting craps at 7am) and stopped to take in the view of the great Mississippi River and Algiers Point off in the distance. 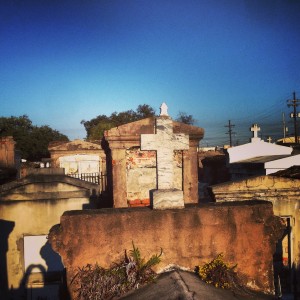 It was incredible to see all of the above-ground tombs, dating back to 1798.

We continued on through the streets, talking as we pedaled, introducing ourselves to one another and sharing brief stories as we waited on crosswalks and street lights to welcome us to the next eye-catching piece of the quarter.  By the time we got back to the hotel, I only had a few minutes to shower and get ready to head to the third floor, so as not to miss the opening remarks by one of the summit’s founders, Doug French.

As we settled in, Doug took to the podium and welcomed us with this video.

As we watched, I felt humbled (once again) to have a visual image of my book included, as well as a clip from A&E’s ‘Modern Dads’ which I also produced.  But even greater than that, was to feel an incredible sense of pride to be included with such a talented group of dads — authors, bloggers, speakers, trend-setters and role models.  To see the accomplishments we’ve made collectively was so awe-inspiring and brought a tear to my eye.  When the video finished, it was a veritable wall of smiles across the room.

Rob Candelino from Unilever spoke next and offered a touching sponsor welcome, accompanied by another amazing video.  On his way down from the podium, he introduced Jim Higley to the stage, who was there to have a ‘living room’ conversation with ‘Friday Night Lights’ and ‘Parenthood’ creator, Jason Katims.  I have to say, that after working in television in Los Angeles for over a decade, nothing seems to phase me anymore, however… this did.  Jason talked about how these shows he created, especially ‘Parenthood’, addressed many storylines that were so close to home, such as his wife going through breast cancer and his young son having Aspergers.  Higley did an outstanding job of captivating the audience with an emotionally layered interview.

I have to preface Lorne’s reading by saying a few things.

Lorne’s piece is entitled, ‘Do I Really Like What I Like?’ and it focuses on his battle with depression over the last several years.  It talks about diminishing self-confidence and increased self-doubt, both of which I’ve personally experienced.  Mine was rooted in the transition in going from a full-time executive to a full-time stay-at-home dad to three.  Sometimes, we as dad (and mom) bloggers find ourselves writing inside of a bubble.  Many of us don’t let anyone else proofread our inner emotions and explicit thoughts, we simply pour them onto the page for the internet to decipher and form an opinion on…OR…we’re too scared to even go that far sometimes.

I applaud Lorne for having the courage and confidence to stand up and talk about his journey.  I think everyone in the room that day found a way to connect with him, I know I did.

I had to take a break for a little bit and headed into the halls on the 3rd floor to meet some of the sponsors that made this entire conference happen.  On behalf of everyone who attended, I’m sure I’m not the only one who would thank Dove Men+Care, Kraft Cheese, Surface, Cottonelle (who had an artist draw our asses), Jamba Juice, Lee Jeans (I found a pair that fits my big ass!) and LEGO Systems for their contributions.  Also not forgotten, Little Remedies, National Geographic Animal Jam (thanks for letting me hold the snakes and gators!), The New Orleans Convention & Visitors Bureau and Starbucks.

I finished the Friday conference schedule with a few breakout sessions and a speed-dating round of workshops.  Then?  It was onto Bourbon Street, to take in the sights, suck down more oysters and cheer on those brave enough to take the stage at the Cat’s Meow, the local karaoke bar.

Saturday was a new day and I had recharged my emotional batteries, preparing to moderate a panel of my own.

I’d like to personally thank Andy Herald of ‘How To Be a Dad’, Michael Kress, the Executive Editor of Parents Magazine and Jessica DeGroot, Founder of the ThirdPath Institute, for participating in ‘Welcome to the Juggle: Fatherhood, Multi-tasking and Work-Life Balance’.  I had a great time with you guys!

I think as a group we all successfully shed some light on how difficult it is to try and ‘have it all’, but I also think we provided some insight into how it gets easier if you’re organized and also as your kids get older.

Later that day, as the conference wore down, I began to feel like time was running out.

Perhaps I wouldn’t make it back to the great city of New Orleans anytime soon or see any of these other fellow dads until next year.  Everyone seemed to be gone from the hotel and my best guess was that they had made their ways to various dinners, so I decided to walk the streets and take in the sights.

I ate more oysters (holy shit where’s the Imodium) and I finally crossed grilled alligator off my foodie bucket list.  I checked out some local art galleries and purchased a wooden cross for my wife’s parents and as I turned it over, noticed a sticker on the back, telling me that it was made of reclaimed wood from houses lost during Katrina.

Holding it in my hands and reading the inscription on the back pushed a lighting bolt of old news coverage through my head…watching people cling to their rooftops with nothing more than the shirts on their back.  So many people had lost their homes, their possessions and livelihoods.  As I stood in the middle of a city that had been through so much…it was simply moving to see how hospitable and welcome the local residents made you feel, even though you’d never met.

How fitting, I thought, that this was the site for the 3rd annual Dad Summit 2.0, where such a diverse group of dad’s from around the country and the world could come together, lend each other support and leave as best of friends.