A few days ago, a buddy of mine asked me for advice on becoming a new parent. I told him that I was no expert…I only do what works for me. But I didn’t want to leave him hangin’, so I gave him a few of my ‘bread n’ butters’. I suggested that he get a REAL nice coffee maker and a case of stain sticks. Also, I casually mentioned that he do himself a favor, and take all his valuable and treasured shit and put it in a storage unit for a few years. I may or may not have said something to the effect of – he shouldn’t get comfortable having anything nice. And lastly, I corrected a long-lived parenting circle cliche. If you ask parents what the most difficult time period was for raising kids, you usually get one answer: The Terrible Two’s.

I looked him square in the eye and said – FUCK the terrible two’s. The two’s ain’t got shit on the three’s. The three’s are where it’s at.

Every day I suit up for battle. It’s not just the usual twice-a-day stuff like ‘I don’t wannnna go’ or ‘I don’t wanna eat that for breakfast.’

I’m talking about multiple things every hour. Telling me that all the tags in her clothes are itchy and that she hates toast, even though she had eight pieces the day before. Getting up in her brother’s face like The Gooch, ripping anything and everything away from him so that he’ll never enjoy a moment of his childhood. Falling to the ground, claiming her ‘knees hurt’ when I ask her to walk up the stairs, as I stand behind her holding eight grocery bags (quickly losing circulation in my fingers) and her brother around my neck. Protesting that something is too cold or hot, when it’s the exact opposite. Refusing to get in the bathtub because she thinks the flower petals from her bath fizzy are dirt. And having band try-outs on every pot and pan we own as soon as I get on the phone with my student loan reps. Screaming, pushing, punching, biting, spitting, back-talking, karate-kicks and testicle headbutts. All in a days work.

So you could imagine the joy I experienced a few months ago when we began sending her to pre-school two days a week. 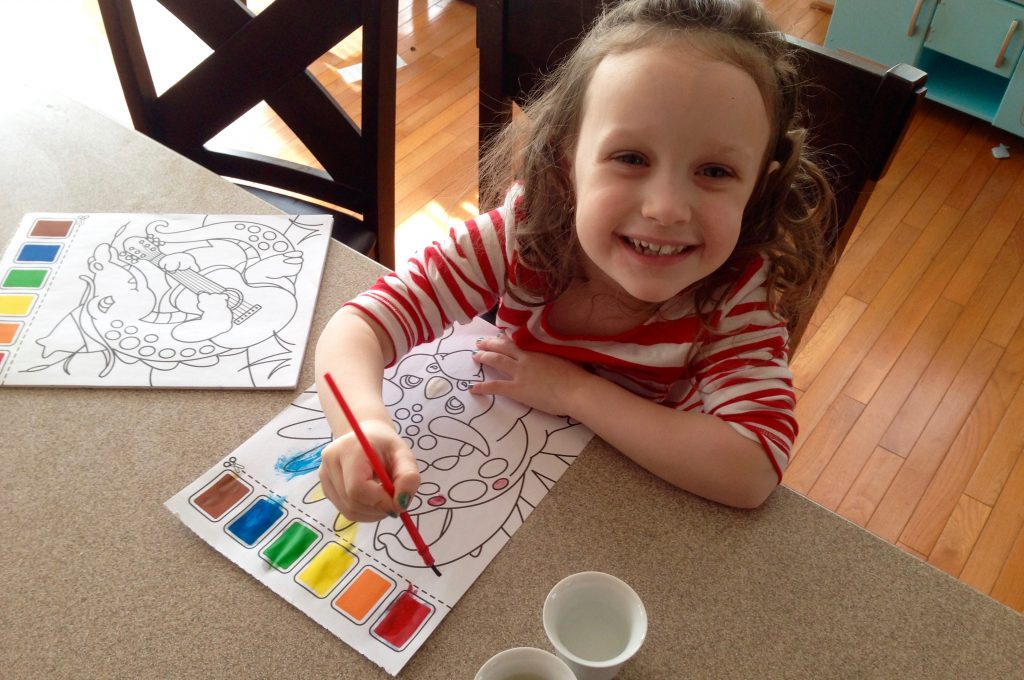 Sure, I’ve still got Charlie during that time, so it’s not a total reprieve, but it’s three hours with half the chaos.

“Let the fucking teachers deal with that shit. Let them fuckin’ see!”, I stated to my wife after she sauntered in from work (no hard feelings) with a latte.

Anyway…I digress…Ava’s parent-teacher conference was yesterday. I had to go. Not that I HAD to go, I WANTED to go. I WANTED to see what her teachers had to say about this straight-up bullshit that was going down. I wanted to count the wrinkles and gray hairs that she’s given them since September. I wanted to confirm that she had made ‘short work’ of them, as I strutted around the room like a rooster, bobbing my head, flapping my elbows and cock-a-doodle-doodling “in your face!”.

But I kept my cool. For a few minutes, anyway.

My wife and I walked in and sat down. We exchanged a few pleasantries and the teacher began…

I looked over at my wife with a furrowed brow and with only my eyes, said “Who in the hell is this girl she keeps calling my daughter?”

Clearly this woman is on drugs or maybe she’s got Alzheimer’s, God bless her.

MY daughter boycotted bananas because she once saw a housefly circle the fruit bowl. MY daughter pulls and stretches the shit out of a brand new shirt, throws it on the living room floor and then tells me it doesn’t fit. MY daughter screams at me like Sam Kinison to not look at her while she’s pooping.

So who was this Jekyll n’ Hyde? Where did she come from?

According to her teacher, this is somewhat common. Kids learn quickly how to manipulate their parents and know exactly what buttons to push and when. Perhaps it’s an early stage of rebellion rooted in her trying to find her independence.

Fine. I get it. That makes sense. I need a helmet, some Kevlar body armor and a therapist for the next few months.  Done deal.

« The Curse of a Filthy Mouth.
Jump In, Your Nightmare is Warm. »