The first few weeks that I spent as an unemployed stay-at-home Dad were probably the most challenging, mentally.  Physically, not so much.  I had done a bang up job of turning the tables on my wife and was doing some ‘nesting’ of my own.  In the living room.  In front of the TV.

The idea of going outside seemed like a monumental task.  There were just too many variables.  I lacked self-confidence and couldn’t bear the thought of being in a position where I’d have to deal with any type of emergency in public.  I had a recurring nightmare about being in Bloomingdale’s without diapers or wipes, with a baby strapped to my chest who had just delivered the crap of the century and having to retreat to a changing room while patrons choked and gasped for air.  If I controlled the variable and stayed at home, I had immediate access to all of the important childcare amenities and avoided my worst nightmare coming true. 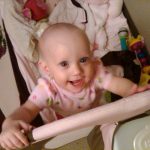 Being an inexperienced Dad, I didn’t realize that babies needed substantial interaction and companionship.  I had implemented a daily routine and moved Ava from one station to the next, first the Pack n’ Play, then the saucer seat.  If she cried, I used the bouncy swing that hung from the door jam.  I even invented the chair-on-chair method to take pressure off of the other stations.  If all else failed, I laid out a blanket and did some of my best ventriloquist work, giving the voice of Sean Connery to a stuffed Hello Kitty in a pathetic attempt to calm her down. 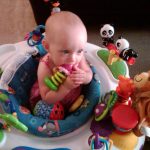 While she endured my version of infant circuit training, I got acquainted with how heinous daytime TV was.

When I wasn’t getting sucked into ‘The Dark Knight’ for the 53rd time, I took on the task of cleaning off my DVR.  I had 80 hours of programming that my wife wouldn’t watch with me and it was time to get it on.  Ava couldn’t talk yet and without anyone around, I was forced to offer her my commentary as we watched old westerns, survival shows and the Stooges. 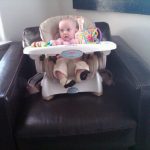 To the neighbors, I must’ve looked like a mental patient, pacing around the living room like Rain Man, having one-sided conversations, ranting about how I thought Curly was always better than Shemp.

As of this post, we’ve watched 131 Phillies games this season on MLB ticket and I can tell that Ava treasures watching 4 solid hours of baseball each day.  I filled in the remaining grooves of the day with a few bottles and a couple of power naps.  Before I knew it, my wife was home from work and I was off the hook. 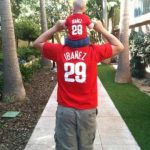 Having all of these luxuries at your immediate disposal is fantastic, but the downside is that you’re inactive and barely make it outside.  At six weeks, I started to resemble Sean Patrick Flanery from the movie ‘Powder’, wearing a swath of gaunt, white skin all over my body.  A subtle spare-tire was making an advance on my waistline and my muscles were in a state of atrophy.  I realized that I had become a depressed recluse.

I was bored out of my mind and realized that Stella needed to get her groove back.  I knew I had to leave the house at least once a day to maintain some form of sanity and broke the ice with a walk down to the beach. I covered both of our pale bodies in SPF 50, outfitted the jogging stroller with all the bells and whistles and cued Tom Petty’s ‘Into the Great Wide Open’ on my inner jukebox.  I took baby steps from the front door to the sidewalk.  As we slowly made our way down to the beach, I realized that I wasn’t going to melt under the sun and neither was she.  A house wasn’t going to fall on us and people weren’t going to point and laugh at me because I wasn’t at work.  I realized that fun and exciting things were happening every day while I sat in front of the TV like the little girl from Poltergeist.  Life was moving on without me.

This simple walk had stirred my tanks and all of the sudden, I felt completely invigorated.  I had a renewed confidence about being able to survive on my own, alone, outside of my living room.  I had a bounce in my step and we took time to watch the waves come rolling in.  Ava loved watching the girls in bikinis play volleyball in the sand.  She got caught staring, but I took a more modest approach, closed my eyes and felt the ocean breeze on my face.

As we walked away from the sand, I passed another young father, also pushing his daughter.  We gave each other a ‘jeep wave‘ and cracked a smile.  I was no longer chairman of the bored.